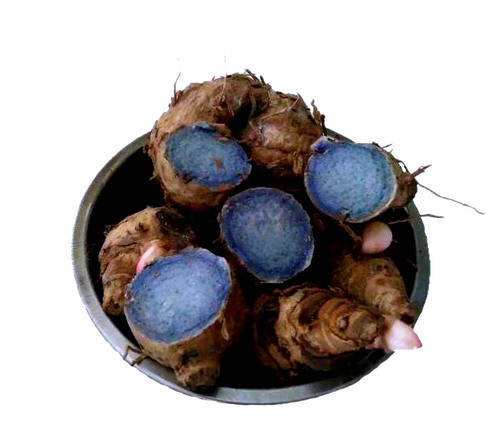 The rhizome of kali haldi has a bitter, sharp, hot taste, and a pleasant odour. It has anti-bacterial and anti-fungal properties, and is laxative. It is used as a tonic for the brain and the heart. Rhizomes are useful in treating leucoderma, piles, bronchitis, asthma, tumors, and tuberculous glands of the neck, enlargement of the spleen, epileptic seizures, inflammations, and allergic eruptions. Black turmeric is native to Northeastern and Central India where it has been part of cultural ceremonies and medicinal remedies. Black turmeric is used by many tribal communities in the state of Madhya Pradesh, Maharashtra. The herb is sold fresh or dried in markets across India and Southeast Asia. As of 2016, Black turmeric has been listed as an endangered species by the Indian Agricultural Department. Efforts are being made to protect and conserve Black turmeric in Odisha, on the central eastern coast, along the Bay of Bengal.

Black turmeric is a rare herb. It is the underground portion of the stem, or rhizome, of the Cucurma caesia plant. The plant itself is sometimes grown as an ornamental, but the root has been used for centuries for medicinal and religious purposes. Black turmeric offers benefits similar to the orange variety, but the darker cultivar contains higher concentrations of curcumin than any other Curcuma species. In Hindi, the herb is called Kali Haldi. It is used widely in India for health and religious purposes.

Black turmeric contains the highest concentrations of curcumin of any plant species. It is a powerful antioxidant and anti-inflammatory. The root has been used medicinally for centuries to treat arthritis, asthma, and epilepsy. Black turmeric root is crushed and can be applied to bruises and sprains to ease discomfort or applied to the forehead to help relieve symptoms of migraines. The rhizome of the plant is aromatic, contains essential oil and used for a variety of purposes. The characteristic pungent smell of the rhizome is due to the presence of essential oil rich in camphor and starch. The rhizome is traditionally used in the treatment of hemorrhoids, leprosy, asthma, cancer, fever, wounds, vomiting, menstrual disorder, anthelmentic, aphrodisiac, gonorrheal discharges and inflammation. Furthermore, the smooth muscle relaxant, anti-tumour and anti-oxidant properties of Curcuma Caesia rhizome extract had been reported.

Rich organic soil that is moist and well-drained. It is grown on different types of soils from light black, ashy loam and red soils clay loam. However, it grows best in a well-drained sandy or clay loam. Keep the soil moist throughout the growing season from spring to fall and feeding with a liquid fertilizer in growing season is ideal.

The land is ploughed, harrowed, mixed with Vermicompost, Neem Cake, Trichoderma and Gypsum @ 10 tonnes per acre together. If required, lime @ 2 tonnes per hectare may be applied to reduce excessive acidity in soils, at least one month before planting.

Middle of April is the best time for raising the crop in North-East India, while in other regions, it is the pre-monsoon period. The crop is propagated vegetatively through rhizomes. The whole or parts of rhizome, weighing approximately 20 g, should be planted in rows directly in the field during April. Planting at a spacing of 30 cm × 30 cm is found optimum, for which 4500 propagules (rhizome segments) are required acre. The rhizomes sprout in about 15–20 days.

Kali haldi is grown as a single crop. But, it may be intercropped beneath widely interrupted canopy trees, like Amla, Mango etc.