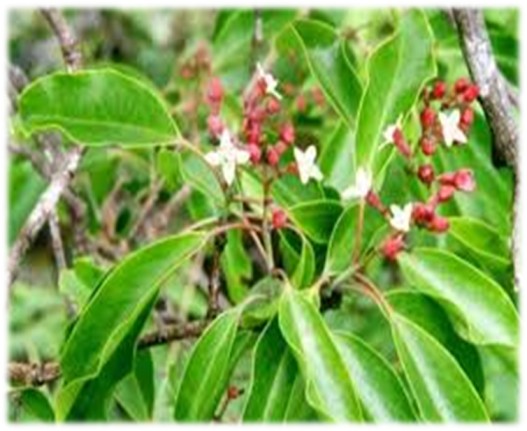 Santalum album commonly known as East Indian Sandalwood or Chandan belongs to the family Santalaceae. It is highly valuable and becoming endangered species. It is distributed all over the country and more than 90% lies in Karnataka and Tamil Nadu covering 8300 sq kms. Sandalwood plays an important role in the religious life of Indians. The essential oil obtained from this wood has occupied significant place in perfumery industries/market. Although it is available in some other countries still the Indian Sandalwood has retained its dominance over other sources because of its quality.

Sandalwood is light demanding and can be easily suppressed by faster-growing species. Cultiva-tion of sandal in India is less attempted though the potential is high. Sandal trees freely produce seed and natural regeneration occurs both via seedlings and through root suckers after trees have been uprooted and the stump removed from the ground.

Conservation action for economically important sandalwood of India needs to be guided by an authentic knowledge base on such plant species. This website has visualized and maintained a well-designed computerized web database providing quick access to some of the most impor-tant basic information relating to S. album tree e.g. distribution, morphology, tree improve-ment, soils, silviculture, physiology, biotechnology, diseases and pests, chemistry and utilization, Production and export management, etc.

Sandalwood oil also known as fragrance oil, perfume oil, body oil and air fresners. The oil has a woody, exotic smell, subtle and lingering and the colour is pale yellow to pale gold. The essential oil contains Alpha-santalol and beta-santalol amount to more than 90 % of the oil – making it very superior sandalwood oil. The main chemical components are santalol, santyl acetate and santalene (Bo Jensen, Denmark). Sandalwood oil is used in many therapies to control muscle problem, mental disorders, fighting bacteria and many more.

Red ferruginous loam is the most common soil on which sandal tree occurs, the underlying rock often is metamorphic and chiefly gneiss. It is not exacting as to the depth of the soil and is frequently found on rocky ground and on stony or gravelly soils.

Sandal requires good drainage and does not stand water logged ground. Best growth of tree is on rich fairly moist such as garden loam and well drained deep alluvium on the river banks. (Troup, 1921) Sandal grows better in slight alkaline condition soil PH Range between 6.7. To 7.5.

Silviculture guidelines to minimize fungal attack risk to the Tropical sandalwood industry. The recommendations will as follows:

Heartwood formation in sandal trees generally starts around 10-13 years of age, but what trig-gers this process has not been very well understood. Certain factors, generally relating to stress, such as gravelly dry soil, insolation, and range of elevation (500-700 m), seem to provide the right environment for the formation of heartwood, irrespective of the size of the stem after 10 years of age. The occurrence of heartwood varies. The value of heartwood is due to its oil content, and the superiority of the oil is due to the percentage of santalol.

Spike disease is one of the important diseases of sandal. This disease is caused by mycoplasma-like organisms (MLO). It can occur at any stage of development of the tree. As the disease progresses, the new leaves become smaller, narrower or more pointed and fewer in number with each successive year until the new shoots give an appearance of fine spike. At the advance stage of disease, the inter nodal distance on twigs becomes small, haustorial connection between the host and sandal breaks and the plant dies in about 2 to 3 years.

Spread of disease is sporadic and the disease is transmitted in nature by insect vectors. It has been found that other insect vectors in addition to Nephotettix virescens may also be responsi-ble for transmission of disease. So far no permanent remedial measures have been prescribed for control of spike disease.