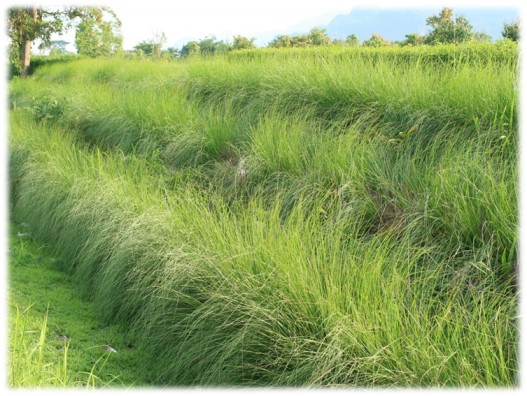 A dense, clumping perennial grass, to 1.5 m in height, native in India and Ceylon. 'Monto' is a sterile (non-seed producing) variety specially selected not to become weedy. In its natural envi-ronment, vetiver grows on riverbanks up to an altitude of 600m. It requires a hot and humid climate. It is adaptable to a wide range of soil and climatic conditions. It can be established on very acid, sodic, alkaline or saline soils. Vetiver tolerates very high levels of aluminium, man-ganese and a range of heavy metals in the soil. Due to its extensive and deep root system, vetiver is very tolerant of drought. It can stand extreme heat (50°C) and frost (-10°C) and can be established in areas with an annual rainfall from 450 mm and higher. Vetiver is sensitive to shade and this will slow growth, especially in young plants.

Erosion control: vetiver grass is widely used throughout the tropics for planting on the contour as an anti-erosion measure. When planted in single lines along the contour, hedges of vetiver are found to be very effective in soil and moisture conservation. The stiff stems of the thick hedge slow down the movement of run-off water and spread it out, trapping silt behind the hedge. This allows more water to be absorbed into the soil, thus reducing run-off and erosion as well as improving crop yields.

Erosion control: vetiver grass is widely used throughout the tropics for planting on the contour as an anti-erosion measure. When planted in single lines along the contour, hedges of vetiver are found to be very effective in soil and moisture conservation. The stiff stems of the thick hedge slow down the movement of run-off water and spread it out, trapping silt behind the hedge. This allows more water to be absorbed into the soil, thus reducing run-off and erosion as well as improving crop yields.

Don't plant after March in southern Queensland to ensure survival from early frost (a well-established plant can survive severe frost). Cover vetiver roots with 2-3 cm of soil and compact the soil firmly. Vetiver grass is propagated by root divisions or 'slips', which are planted at a distance of about 15 cm to ensure a close hedge during its first year. Slips should be planted in wet soil or irrigated well immediately after planting. Water every second day until established. Fertilise with a complete organic fertiliser at the time of planting; fertilise every year after planting early and again late in the summer. Trimming the tops of the young plants stimulates early tillering and the hedge will close up faster.

Chrysopogon zizanioides which is popular as Vetiver is a grass which is perennial. It belongs to the family of Poaceae and the native of this grass in India. In the west and northern parts of India, it is termed as Khus. Its maximum height would be 2 meters and the flowers of this plant would be brownish-purple. The leaves would be rigid and the stems would be tall and thin. This plant has wide cultivation in the tropical regions of the world.

The essential oil, which is derived from Vetiver and this, is done through steam distillation of the plant roots. The aroma of this plant is very strong and is woody, spicy and smoky. The most important quality of the Vetiver essential oil is that it is deeply grounded and is very helpful in promoting sleep. This oil also helps people who suffer from restlessness which makes them deal with stress.

The best time to plant Vetiver is between June and August. In the climatic conditions of South India, the fluctuations in temperature occur and it is not that significant. But the monsoon in South India starts early, so the perfect plantation time would be between February and April.

Benefits of Vetivar Oil And Grass:

Every part of the Vetiver plant can be used for some or the other purpose. The roots of the plant are very much popular because of the essential oil produced through them. The essential oil of Vetiver is used in the industry of perfumes. This essential oil is also used as a flavor in food and beverages. The effect of the Vetiver, which is aromatic gives calmness to the mind and brings it to a balance. The medicinal values of the Vetiver are that it acts as an antiseptic, antispasmodic. It helps in the stimulation of immunity and works as a sedative to the nervous system and stimulates the circulatory system. The soothing and calming properties of the Vetiver oil will help the people suffering from anger to dispel it. It also reduces hysteria, irritability and also behavior caused by neurotic weaknesses which in turn decreases stress and anxiety. The essential oil has revitalized properties which will relieve the human beings from the exhaustion caused by physical and mental activities. It also reduces the general aches caused, insomnia and any feelings of anxiety. Apart from the above benefits, the young leaves can be harvested for animal fodder.

Any kind of soil is suitable for the growth of Vetiver. But it is important to remember that the soils which are light should not be used because the roots, when grown in lighter soils, will pro-duce the least amount of oil. The soils which are well drained, sandy loam, red and rich in the organic content can be preferred for the plantation of Vetiver. Clay loam soil can also be pre-ferred for cultivation, but again, clayey soil should not be used. The soils which are saline or alkaline can be preferred but the pH content should be between 8 to 10. The site which is flat can be used for cultivation, but it is very important to check the watering on a regular basis so that no clogging occurs which would stop the growth of the plantlets which are just growing. The Vetiver, which is a matured one can survive waterlogging and also has the capability to absorb heavy metals from the water which is dissolved.

The Vetiver plants can survive the temperatures from -14 °C to +56 °C and it is completely de-pendent on the region in which it is growing. The soil temperature, which is optimum for the growth of Vetiver is 25 °C. If the temperature is below 5 °C, then there would be an occurrence of dormancy in the roots of the plants. When the climatic conditions are frosty, them the shoots will become dormant and change their color to purple eventually leading to death. But the growing points which are underground will survive and will grow again quickly if there is any improvement in the climatic conditions. If the shading is partial, then it is preferred but if there is no shading, care should be taken as it affects the growth of the plant. The Vetiver herbal plants can survive in the drought, floods and it also grows very well in the climatic conditions which are humid in a moderate way and the average rainfall should be at least 1500mm. If the rainfall is scanty, it can also be grown as a crop which is irrigated.

Harvesting of the roots of Vetiver is very important. This is because of the yield and the percentage of oil change according to the climatic conditions. The harvest of roots is done after 18 to 24 months. If the harvesting is done at an early stage, the yield of essential oil would be higher. Though the yield is high, the early harvest leads to the oil, which has less specific gravity making it lack high boiling constituents. If the roots are in the ground for 24 months, the quality of oil improves but the yield decreases. The crop is harvested between the months of December and February by digging the clumps along with the roots. This is all done manually. A mouldboard plough drawn by a tractor is used to dig up to a depth of 35 cms. Harvesting which is done in a mechanical way will give 16% higher roots than the manual harvesting.